Magnus Carlsen (1990-) is a Norwegian chess Grandmaster and World Chess Champion, with a peak rating of 2882 – the highest in history at the time of writing. A chess prodigy, he earned the Grandmaster title at the age of 13. He uses a variety of openings to make it as difficult as possible for his opponents to prepare against him.

Another day, another draw after 49 moves. Caruana and Carlsen repeated the Rossolimo Variation from their first game. More 🡢

Fabiano was clearly in charge, but Carlsen successfully maneuvered for a draw. More 🡢

The first match was a grueling marathon that lasted 7 hours, and although Carlsen had the advantage, he wasn’t able to convert it to a win. More 🡢 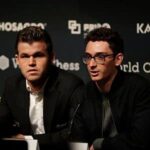 If Fabiano Caruana wins the World Chess Championship match against champion Magnus Carlsen this month, he will be the first American to hold the championship title since Bobby Fischer won it in 1972. The match between Caruana, age 26, and Carlsen, age 27, of Norway, takes place in London, England, from Nov. 9 to 28. More 🡢

A puzzle from this century’s chess master: Magnus Carlsen vs. Hans Harestad, Copenhagen, 2003. Mate in 3. White to move.

Former World Chess Champion, Viswanathan Anand, fought to defend his title against Magnus Carlsen. If you own SparkChess 7 Full Version you can download the PGN database and replay the games at your leisure. More 🡢