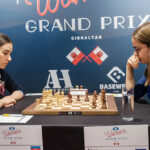 Unlike checkers, where captures are compulsory, in chess one may delay a capture by playing an in-between move, also known as an intermezzo or a zwischenzug. When losing weight, there are likewise plateaus in between big changes. More 🡢 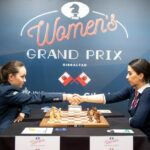 The Women’s FIDE Grand Prix Series concludes in Gibraltar. The last chess tournament in the series, a 12-player round robin, runs from May 22 to June 2, 2021. The two players who score the most cumulative points in the Grand Prix series qualify for the FIDE Women’s Candidates Tournament, which determines the next Challenger to the Women’s World Chess Champion. More 🡢

This is the endgame between two strong German chess players, Siegbert Tarrasch and Max Kurschner, in Nürnberg, 1893. With a surprising sacrifice, white won in two moves. Can you find Siegbert's moves? END_OF_DOCUMENT_TOKEN_TO_BE_REPLACED