John Bartholomew (1986-) is an American chess player, International Master. He has a YouTube channel dedicated to learning chess. 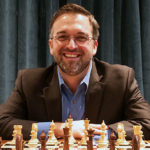 When I lived in Austin, Texas, from 1992 to 1996, I taught group chess classes and private chess lessons. Two of my private students were Heather Flewelling and John Hendrick. Heather became an astrophysicist and John became a chess teacher. This article is about their passion for chess. More 🡢 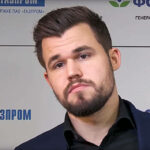 Before his convincing display of Rapid chess against challenger Fabiano Caruana in the tie-breaks of the 2018 World Championship Match, Magnus Carlsen had won the World Rapid Championship two times (2014, 2015). On December 28, 2019, Carlsen won his third World Rapid Championship title. In this article, I will briefly discuss Carlsen being “better than the others” and then segue into what to do, according to one chess author, if you out-rate your opponent in a chess game. More 🡢

The “ask a chess celebrity” winners are…

SparkChess readers had questions for chess IM John Bartholomew. We decided which questions were the best ones. All five readers received one-year Premium Live SparkChess memberships. Read on to find out which of the five also won a three-month PRO membership to Chessable and for John Bartholomew’s answers. More 🡢 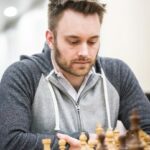 Prizes for your questions for chess celebrity John Bartholomew

This is the endgame between two strong German chess players, Siegbert Tarrasch and Max Kurschner, in Nürnberg, 1893. With a surprising sacrifice, white won in two moves. Can you find Siegbert's moves? END_OF_DOCUMENT_TOKEN_TO_BE_REPLACED