Fabiano Luigi Caruana (1992-) is an Italian-American well known chess player. A chess prodigy he received the grandmaster title at just 14 years (2007) being one of the youngest grandmasters. 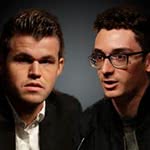 The shortest round of this Championship ends with another draw. More 🡢

“There’s a lot riding on the last game. It will be tense for both of us.” – Fabiano Caruana. More 🡢

“I felt that it was very close tonight. The problem is if I don’t mate I’m losing. So I was trying to find some middle ground and my time was running out. I don’t know. I was just so nervous, I couldn’t make it happen. It ended up just being nothing.” – Magnus Carlsen More 🡢

After the game, Magnus Carlsen declared that “I was very happy with the opening, obviously. You cannot expect more than what I had for sure.” With few rounds remaining, a tie-break becomes a distinct possibility, where Carslen is considered the favorite. Despite the anticlimactic draw, a new record was set: the longest streak of games ending in draw in a chess championship match! More 🡢

“This was a tough game. He was the one who had all the chances. So I am happy to have survived it for sure.” – Magnus Carlsen. More 🡢

Magnus Carlsen: “After the last game it kind of felt like I got away with murder. In that sense it’s easier to be calm about a draw today. I’m not loving it, but I’m not in any sort of panic mode either. Could have been worse. The match is still equal and with black, it’s been going OK. I’m not at all thrilled about my play today.” More 🡢

This is the endgame between two strong German chess players, Siegbert Tarrasch and Max Kurschner, in Nürnberg, 1893. With a surprising sacrifice, white won in two moves. Can you find Siegbert's moves? END_OF_DOCUMENT_TOKEN_TO_BE_REPLACED